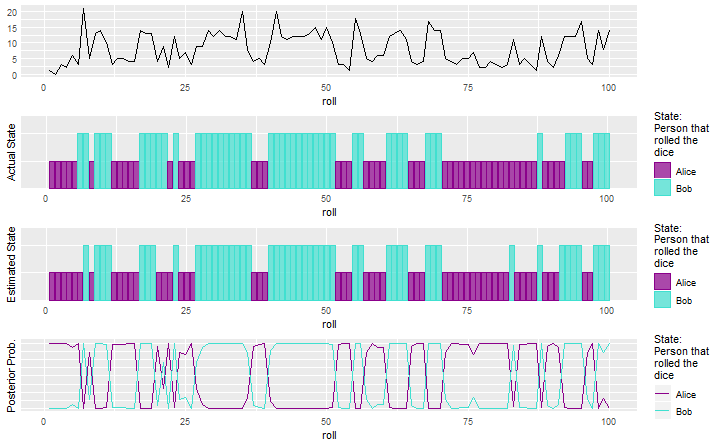 Hidden Markov Model example in R with the depmixS4 package

Recently I developed a solution using a Hidden Markov Model and was quickly asked to explain myself. What are they and why do they work so well? I can answer the first part, the second we just have to take for granted.

HMM’s are for modelling sequences of data whether they are derived from continuous or discrete probability distributions. They are related to state space and Gaussian mixture models in the sense they aim to estimate the state which gave rise to the observation. The states are unknown or ‘hidden’ and HMM’s attempt to estimate the states similar to an unsupervised clustering procedure.

Now assume Alice and Bob are in a different room and we can’t see who is rolling the dice. Instead we only know how many jelly beans were taken after the roll. We don’t know the colour, simply the final number of jelly beans that were removed from the jar on that turn. How could we know who rolled the dice? HMM’s. 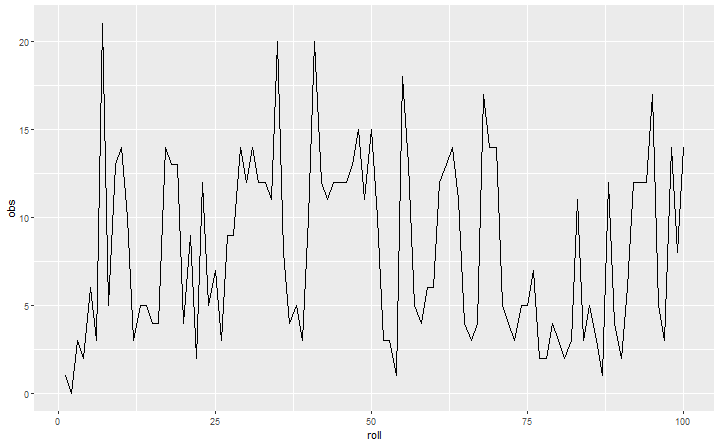 As you can see it’s difficult from simply inspecting the series of counts determine who rolled the dice. Using the depmixS4 package we’ll fit a HMM. Since we are dealing with count data the observations are drawn from a Poisson distribution.

The model converges quickly. Using the posterior probabilities we estimate which state the process is in i.e. who has the dice, Alice or Bob. To answer that question specifically we need to know more about the process. In this case we do, we know Alice only likes the black jelly beans. Otherwise we can only say the process is in state 1 or 2 (or however many states you believe there are). The plots below show are well the HMM fits the data and estimates the hidden states.

It’s impressive how well the model fits the data and filters out the noise to estimate the states. To be fair the states could be estimated by ignoring the time component and using the EM algorithm. However because we know the data forms a sequence there is more infomration at our disposal since the probability of observing the next draw is conditional on the previous i.e.

is the number of jelly beans.

This may have been a relatively easy case given we constructed the problem. What if the transition probabilities were much greater? 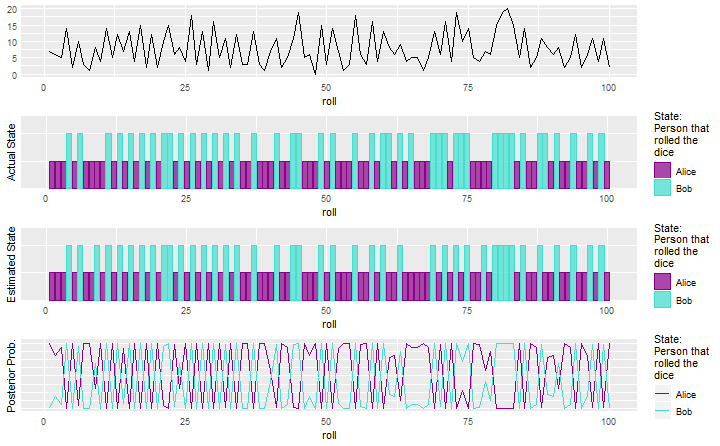 It is much noiser data but the HMM still does a great job. The performance is in part due to our choise of means for the number of jelly beans removed from the jar. The more distinct the distributions are the easier it ifor the model to pick up the transitions. To be fair we could calculate the median and take all those below the median to be of one state and all those above in another state which you can see from the plot wold do quite well. This is because the transition probabilities are very high and it is expect we would observe a similar number of observations from each state. When the transition probabilities are not the same we see the HMM perform better.

What if the observations are drawn from the same distribution i.e. Alice and Bob take the same amount of jelly beans? 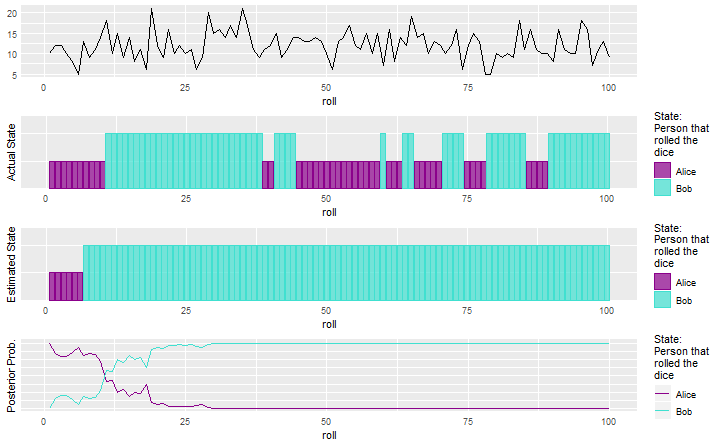 Not so great, but that’s to be expected. If there is no difference between the distributions from which the observations are drawn then there may as well be only 1 state. Feel free to play around with different values to see their impact.

How are the states actually estimated?

From here the Baum-Welch algrothm is applied to estimate the parameters which is a variant of the EM algrothm which leverages the sequence of observations and the Markov property. In addition to estimating the parameters of the states it also needs to estimate the transition probabilities. The Baum-Welch algrothm first makes a forward pass over of the data followed by a backward pass. The state transition probabilities are then updated. This process is then repeated until convergence. See the link for an example to walkthrough.

In the real world it’s unlikely you’ll ever be predicting who took the jelly beans from the jelly bean jar. Hopefully you are working on more interesting problems, however this example breaks it down into understandable components. Often HMM’s are used for

to name a few. Whenever there is a sequence of observations HMM’s can be used which also holds true for discrete cases.