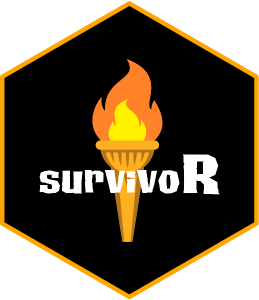 survivoR v1.0 is now on CRAN

I’m happy to announce that survivoR v1.0 is now on CRAN. The package now contains all the features intended for the first major release. A big thank you to Carly Levitz for helping collate and test the data.

This post details the major updates since v0.9.12. For a complete list of tables and features of the package please visit the Github page.

To jump right into it you can install the package with

Or from Git with

If you find an issues please raise them on Github and I’ll correct them asap. For updates feel free to follow myself and Carly on Twitter.

This release features new datasets, additional fields on existing tables, and the removal of unused or redundant features.

All advantages and hidden immunity idols found across all seasons are captured in these two tables. The tables map to each other by advantage_id and detail the life of each advantage in tidy format.

This dataset lists the hidden idols and advantages in the game for all seasons. It details where it was found, if there was a clue to the advantage, location, and other advantage conditions. This maps to the advantage_movement table.

The advantage_movement table tracks who found the advantage, who they may have handed it to, and who they played it for. Each step is considered an event. The sequence_id tracks the logical step of the advantage. For example, in season 41, JD found an extra vote advantage. JD gave it to Shan in good faith who then voted him out keeping the extra vote. Shan gave it to Ricard in good faith who eventually gave it back before Shan played it for Naseer. That movement is recorded in this table.

Who the advatnge was eventually played for, if it was successful or not needed is included in this table. Or in the unfortunate situations when someone is blindsided and voted out with the advantage, that is recorded here.

The boot_mapping table is to easily filter to the set of castaways that are still in the game after a specified number of boots. How this differs from the tribe mapping is that rather than being focused on an episode, it is focused on the boot which is often more useful. The number of boots and who is left in the game is often the better indicator of the stage of the game than the episode or day. When someone quits the game or is medically evacuated it is considered a boot. This table tracks multiple boots per episode.

In the case of double tribal councils there is an order in which castaways have their torch snuffed. This is also capture even though it means there is a set of players still remaining for literally minutes before the next leaves the game.

If you needed to determine who is left in the game of season 41 after 12 boots (12 people have either been voted off or left the game) you can use the following code.

A an example, the boot_mapping table can be used to calculate how many people and who participated in certain challenges once mapped to challenge_results.

This table comes in hand for many types of analysis. Please see the documentation for detailed descriptions of the fields.