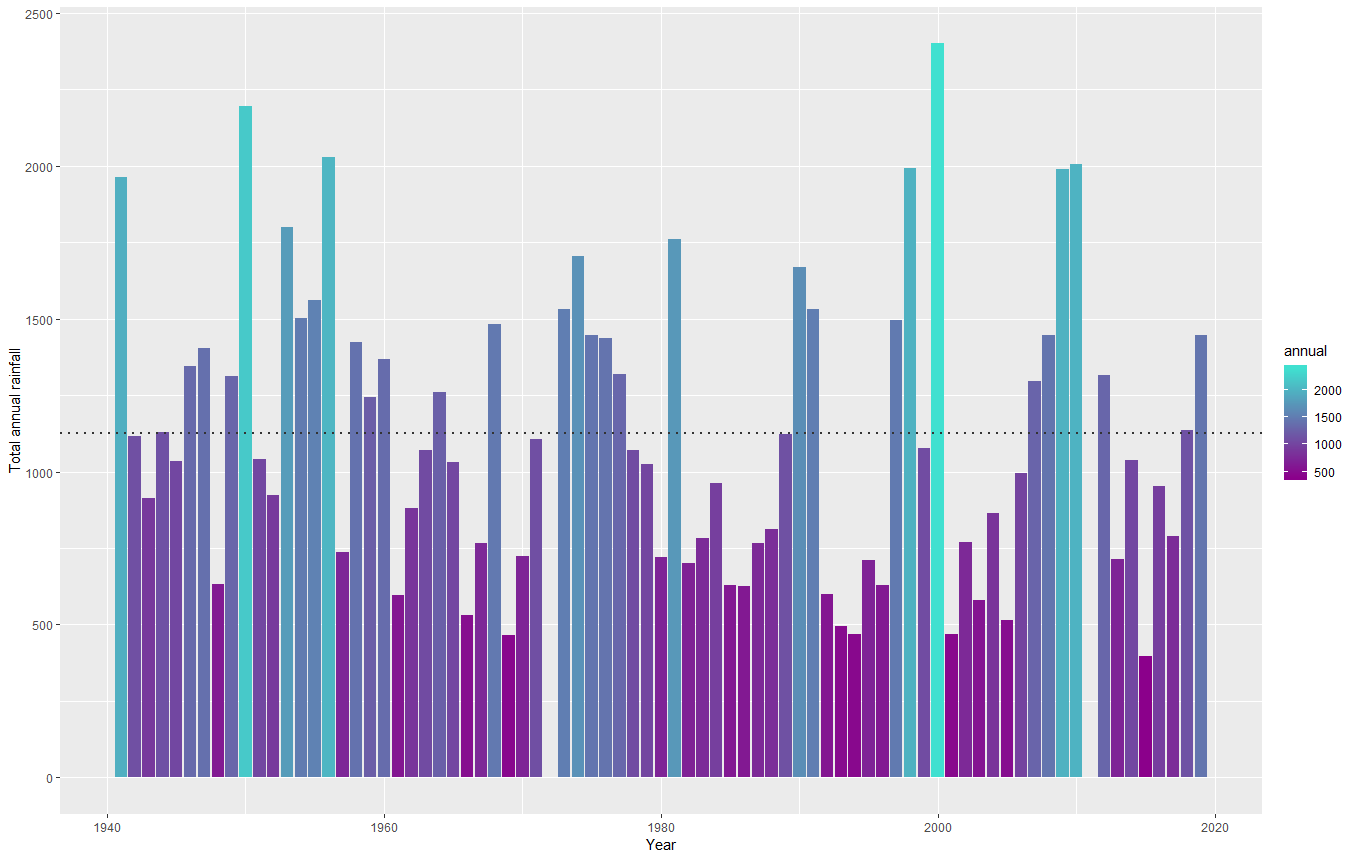 Townsville, Qld, has been inundated with torrential rain and has broken the record of the largest rainfall over a 10 day period. It has been devastating for the farmers and residents of Townsville. I looked at Townsville’s weather data to understand how significant this event was and if there have been comparable events in the past.

Where this may interest the R community is in obtaining the data. The package ‘bomrang’ is an API allowing R users to fetch weather data directly from the Australian Bureau of Meteorology (BOM) and have it returned in a tidy data frame.

Historical weather observations including rainfall, min/max temperatures and sun exposure are obtained via get_historical(). Either the ID or the lat-long coordinates of the weather station are needed to extract the data. The ID information can be found on the BOM website by navigating to the observations page.

Using the station ID the rainfall data is extracted with the following.

And cleaning up the dates.

Total rainfall over a 10 day period

Applying a 10 day rolling window over the entire historical record it’s easy to see the significance of this rainfall event. The 8th February recorded 1259.8mm of rain in the 10 days prior. It dwarfs the previous record of 925.5mm set in 1953. It also highlights other significant events in the past, in particular 1968, 1998 and 2009 but these don’t come close to the 2019 event. 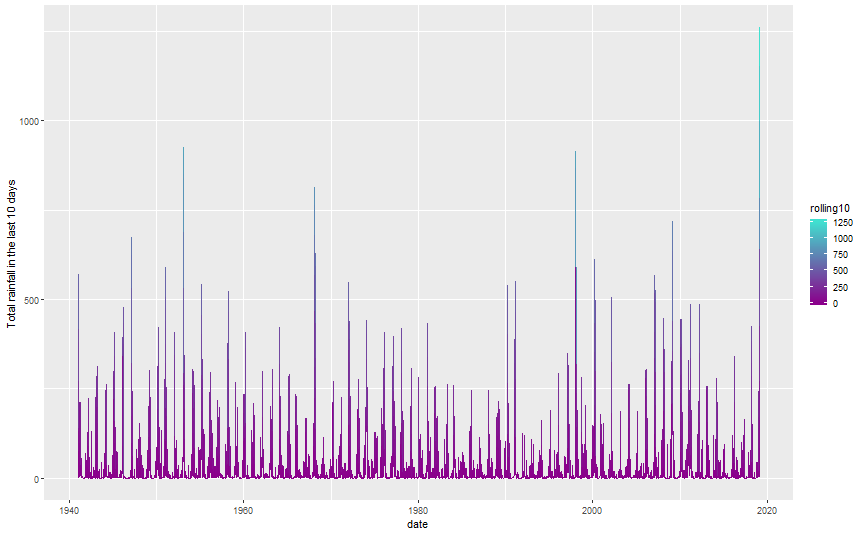 It really was a phenomenal amount of rain. This was not the largest rainfall in a day however, that record occurred in 1998 with a massive 548.8mm of rain. In fact the 2019 floods don’t feature in the top 10 wettest days, but the consistency over 10 days made it the wettest on record.

Townsville received over a years worth of rain in 10 days. The graph below shows the annual rainfall measurements and average annual rainfall (dotted line) given the historical records. Even with only 5-6 weeks of the year, 2019 is already one of the wettest years on record. 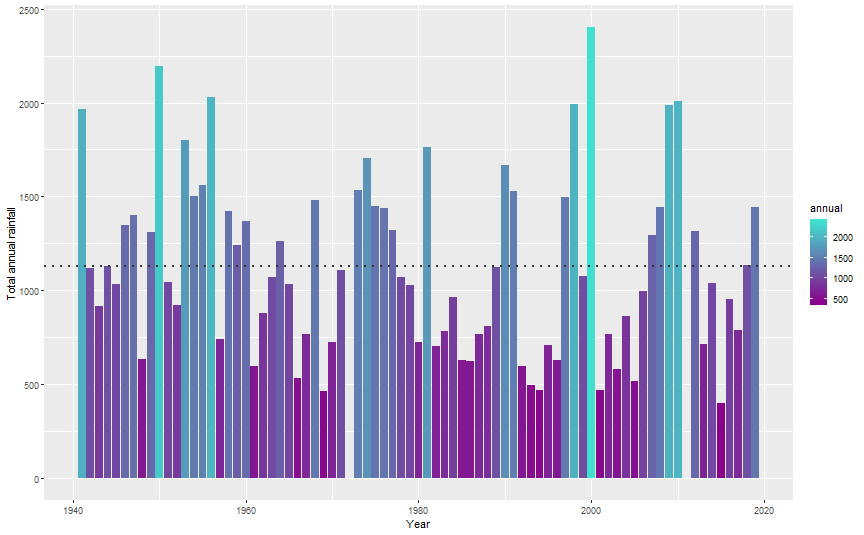 On close inspection the data suggests that the first 40 years of records are less variable than from 1980 on-wards. There appears to be drier years and wetter years in the latter half.

The current record was set in 2000 at 2400mm where in this year Townsville had a few heavy rainfall events in the months up until April and some lesser events near the end of the year. Comparing 2019 to these years, there is definitely potential for 2019 to be the wettest on record. 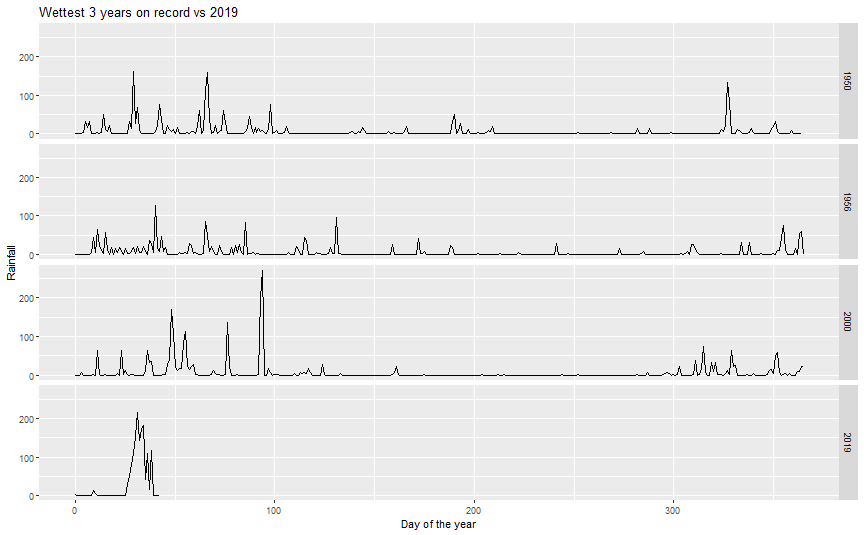 Below clearly shows which years have had significant rainfall in the first part of the year. The years which have received greater than 700mm (dotted line) are quite distinct from the bulk of the data. Since the wet season ends in April the other heavy years (like 2000) haven’t had their major events yet. This is shown in the April plot at the bottom which has a much stronger relationship (obviously). The years which experienced heavy rainfall at this time of year, in general didn’t get too much afterwards. 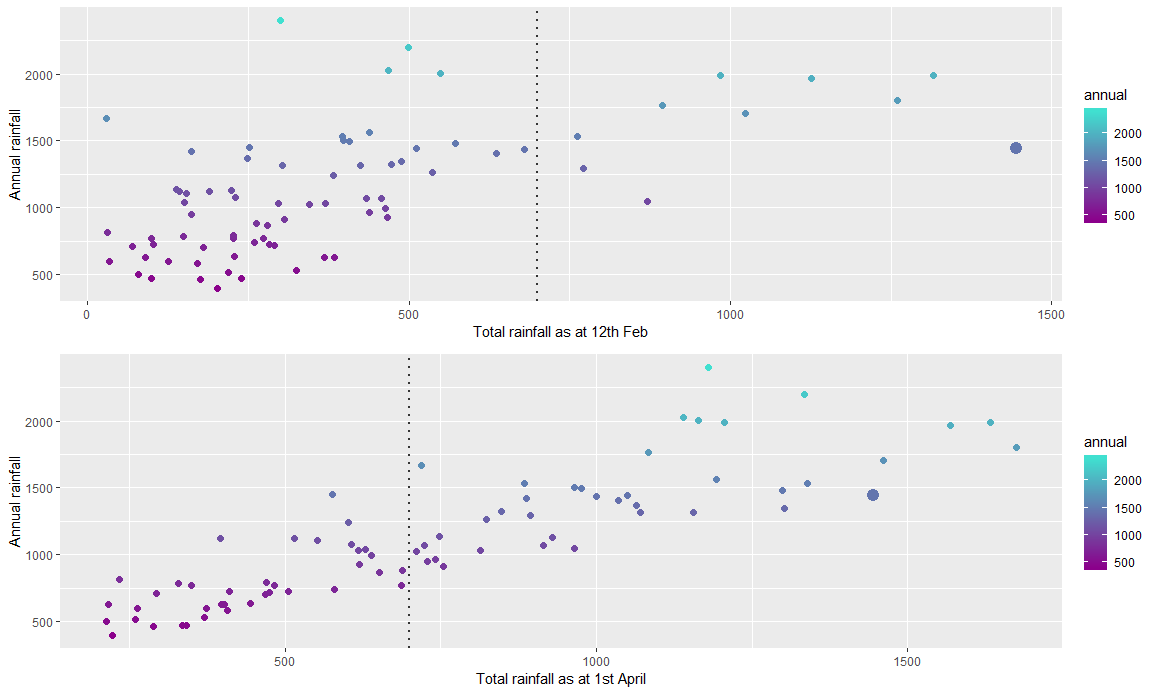 For what it’s worth I’ll offer a prediction for the expected annual rainfall and probability of being the wettest year on record (which, to be honest is a fools errand – tropical weather systems are pretty complex stuff) 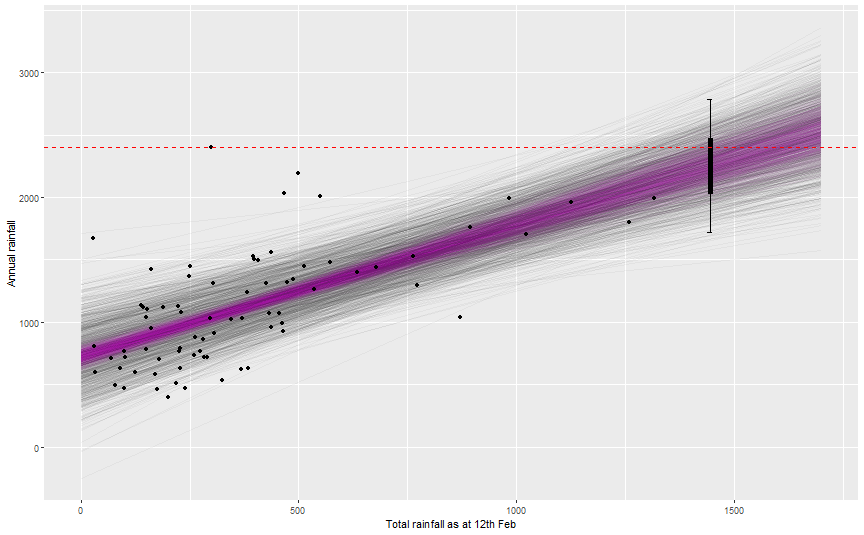 Based on this (crude) model, the expected annual rainfall credible interval is (2027, 2472) mm. Using the posterior predictive distribution for 2019, the probability 2019 will experience record rainfall is 0.29.

But let’s all hope there’s not too much more rain. There has been enough.