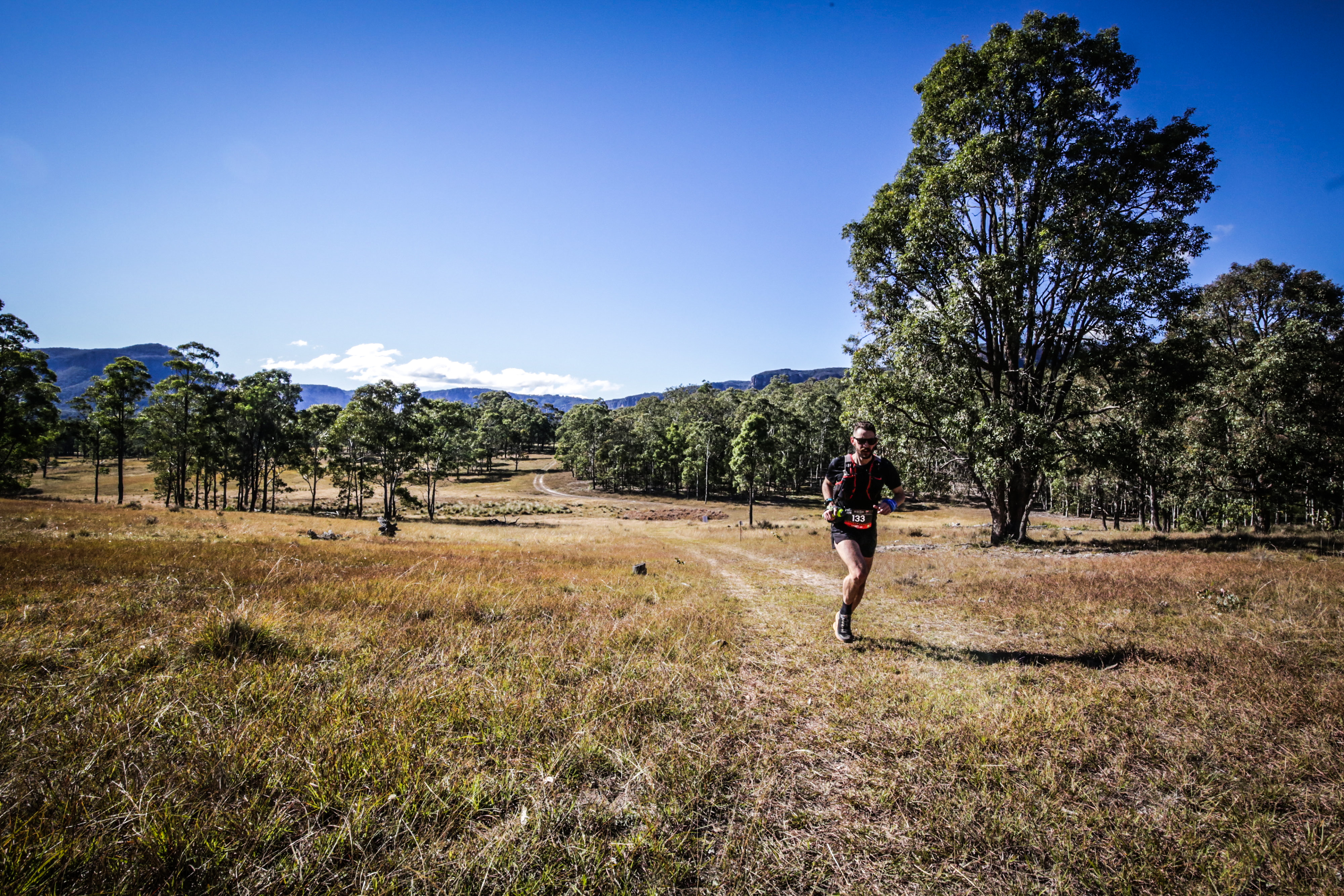 This was my first UTA100. A race I’ve long wanted to do. It’s an amazing event, the atmosphere is exhilarating as thousands of keen ultrarunners and mountain lovers descend on the Blue Mountains. It really is the most iconic race on the Australian calendar.

I was super excited for this race, not only for the race but also to just to run on the trails for the first time. Despite only living 3 hrs away from the Blue Mountains I had never run on these trails. I was going in blind not knowing what to expect. Having put in the hard work training and was ready to give it everything.

I always go in with 2 goals: 1) finish 2) meet my goal time. Estimating a challenging but realistic goal time is hard if you haven’t competed in the race before. You can only really make an educated guess based on previous results by other runners you may know. After a bit of data work and investigation I settled on aiming for sub 11 hrs. Based on previous years this should put me in the top 20. 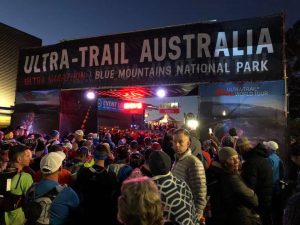 Race morning it was 3 degrees but the buzz was electrifying so wasn’t bothered by the cold. In the first 4 kms I positioned myself where I wanted to be going into the single track. At this point it was about 40-50th. I wanted to get a nice flow on in the single track and not have to make up the time hitting the fire trail (to be fair it’s not that big of a deal, it’s a long day out). Running with a couple of mates along this first trail was the sun was coming up was great. At this point just chugging along and chatting. 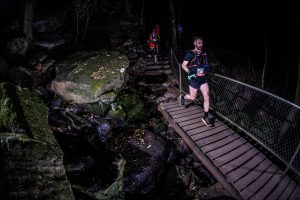 Coming into CP1 at the 12km mark I was on pace and feeling great. Filled up my handheld with fizz and got moving pretty quickly. We had a good bunch running together and not getting too carried away. Hitting the single track after the ladder was a highlight of the race. A techy trail but you could get a nice flow on. The group stuck together and just enjoyed the amazing views.

Coming into CP2 at the 31 km mark I was still feeling great. Filled up my handheld with fizz again and grabbed a few snakes and a piece of watermelon. Kept moving pretty quickly but making I stuck with the group, although it didn’t last too long. A little further along we hit a nasty climb up to Ironpot Ridge.  I took it pretty steady, it’s a long day and from what I understand the race doesn’t really start until CP4. Going up the climb the group tended to split and and everyone started to run their own race. 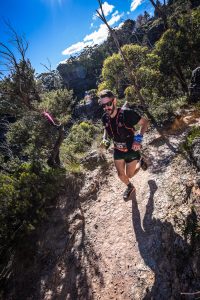 Keeping a comfortable pace coming down from Ironpot and along the fire trails I reached CP3 at the 46km, the first time we get to see our crews. The atmosphere running into CP3 was awesome. Nothing like a hundred cow bells to keep you moving. My crew restocked my pack and flasks in only 20 seconds or so. I felt much better than any other race being 46 km deep. The only section of the track I really knew was the climb back to Katoomba via Nellie’s Glen. It’s a brutal climb and a lot of peoples race can become unstuck here. I took it sensibly and got into the power hike zone as the gradient got steeper. Managed it well and happy I didn’t push too hard. 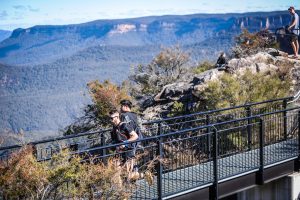 Approaching CP4 at the 57km mark I had worked my way into about 17th place. It had definitely felt like I had run 57km although I was still feeling good, particularly compared to others that come in before me. A few  looked like shattered units.

Looking at the profile I expected the section between CP4 and 5 to be a bit flatter and faster if you were good at running more technical terrain. How wrong was I? The profile doesn’t show a lot of elevation gain or long climbs but it is very undulating and a tonne of stairs. I wasn’t prepared for how tough this section was going to be. There were some hands on knees regaining breath and letting the heart rate drop in this section. Beautiful trail but hard to enjoy when you’re deep in the pain cave. When it actually flattened out I got back into a rhythm and kept a good pace. 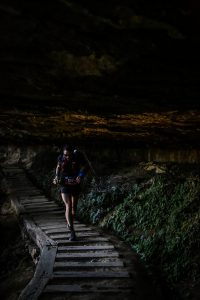 It felt like a long time before I reached CP5 (78km) so it was a welcome sight when I got there.  Still sitting in 18th place and on pace things were looking good for reaching my goal time. The next 22km were going to be tough but nothing was going to stop me from finishing from here.

My legs started to feel pretty beat up after that last leg so took a seat for a minute while my crew got things in order and left after about 2-3 minutes. That downhill smash along the fire trail after leaving CP5 really tore my legs apart. I could feel I was on the verge of cramping and tried to manage it the best I could.

Wasn’t long before they did seize up and spent sometime on the ground stretching it out. All I could do is take it easy, move sensibly and try to keep it under control. A fellow runner offered a cramp fix which I had never had before. Wow, that stuff tastes bad! But it may have worked, hitting the 94km my second wind, just a little too late. 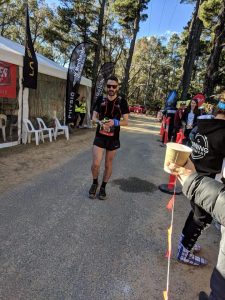 The last few k’s seem to take forever. Finally I made it to the base of the Furber steps. With two hands dragging myself up the steps. That last 100m is why we run these things, crossing the line is a sensational feeling. I finished in 11 hrs 32 mins in 30th place. Missed my goal time but completed my first goal and earned that buckle.

Honestly I don’t think I would have done too many things differently. I paced my race well up to the CP4 and was getting the right amount of calories in. Perhaps I should have taken more electrolytes to prevent the cramping but I think that’s mostly conditioning my legs to get stronger. I focused on the up and downhills in my training but probably needed to beat them up a little more to get them ready. 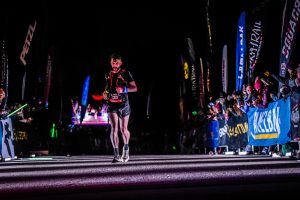 I love this event, it’s an amazing event and has such a great atmosphere. I’ll be back next year and going for sub-11 hrs. Time to book my accommodation so I don’t miss out. Katoomba gets packed.